The Talisman of Zandria by Christine Norris

The Talisman of Zandria 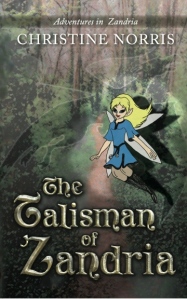 Adventure happens when you least expect it

Ivy Peterson is Less-Than-Ordinary. She’s so very Less-than-Ordinary that sometimes she feels invisible. She is also Not Very Brave.

But part of her wishes she could be something More, that something Extraordinary and Completely Unusual would happen. What she forgets about wishes is that they do sometimes come true.

Ivy accidentally falls into Zandria, a magical world that exists just outside her own. And she’s trapped there because someone has stolen the Talisman of Zandria, a magical amulet that controls the five gates the worlds. She and her new friends—the wizard Arden, his young apprentice Connor, and a pair of fairies—set off on a quest to recover the Talisman, a journey of discovery that will change Ivy in ways she never could have imagined.

When everything you know has changed…

Bio-terrorists release a plague in the United States that spreads to kill most of the world’s Caucasian population. As the deadly virus mutates, Tzu Shin, a renowned medical doctor and biologist, defects from China to help develop a cure. His only daughter, Lin Kwan, is left behind in Hong Kong with her aunt.

Then Kwan’s father summons her from across the sea to bring him Chinese medicinal herbs he needs to develop a cure. Lonely and missing her parents, she accepts the challenge, traveling with her sensei Li Zhong to the New World.

But a Chinese assassin is on her trail, determined to kill her and Li Zhong, and when Kwan discovers her father has disappeared, she sets out on a journey to find him and deliver her precious cargo, a quest that she may not survive.

No More Goddesses by Kim Baccellia

No More Goddesses
by Kim Baccellia 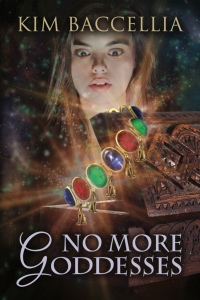 Getting a date shouldn’t be this hard.

Jordan Lake discovers an ancient bracelet in her grandmother’s house and uncovers a family mystery that links her favorite actress, Audrey Hepburn, a romantic movie, and an aunt she never knew. Jordan hopes the bracelet will bring her love. Instead, it brings one nightmare after another, unleashing Hathor, the Egyptian love goddess, who decides it’s fun to mess with the McKnight High School social scene.

Jordan holds the key to vanquish Hathor, but will she figure out what it is in time to save her school, one of her best friends, and get a date to the Valentine’s Day dance? 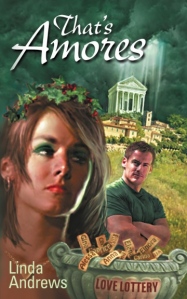 Love flies with the speed of an arrow

How’s a girl supposed to stay single with the entire town wants her married?

Alessa Lombard has a plan to avoid the marriage trap. It’s not that she’s opposed to marriage—wedded bliss is fine…for other people. All she needs is the help of the town’s newest bachelor to help pull off a fake romance, and the family curse won’t have a chance to ruin her life.

Determined to fall in love, Sloan Dugan immigrates to the magical town of Amores. Surely, in a town devoted to love, he’ll find a woman who doesn’t use trickery and deceit.

But Cupid has other plans. Alessa and Sloan will find themselves playing the game of love whether they want to or not. Will winner take all? Or lose everything?

In the Sea Nymph’s Lair by Robert E Vardeman

The ferocious Spell Wars have ravaged the island kingdoms of the Plenn Archipelago for more than a century, leaving behind ghostly remnants only wizards of Durril’s ability can exorcise. With his apprentice, Arpad-Zen, Durril is at sea when an horrific storm sinks their ship. Arpad-Zen finds himself adrift–but Durril is rescued by magical denizens of the sea.

But is being dragged to the bottom of the ocean and held in thrall by the sea nymph Rusalka a “rescue?” He is forced into Rusalka’s service but she is never satisfied and wants ever more from him. First he is to perform an undersea quest that no one has ever survived and then there will be an even greater challenge…his nuptials with the ruler of the under-ocean kingdom.

After the Spell Wars – Book 2

Available in trade paperback, and in ebook for Kindle and NOOK .

Posted by Gloria Oliver on May 18, 2011 in Zumaya Otherworlds 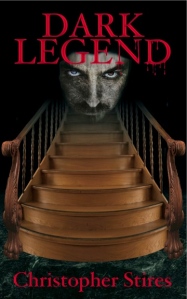 “…What follows is my story–how I was murdered and the events after.”

For 150 years, in a house called Journey’s End, his ghost has walked the halls among the shadows of murder and horror. Now a courageous young woman has come, risking her life to free him. But a ruthless demon soldier will summon the terrors of Hell to stop them and continue the Dark Legend.

You can learn more about Christopher Stires at Facebook.

Posted by Gloria Oliver on May 15, 2011 in Zumaya Otherworlds